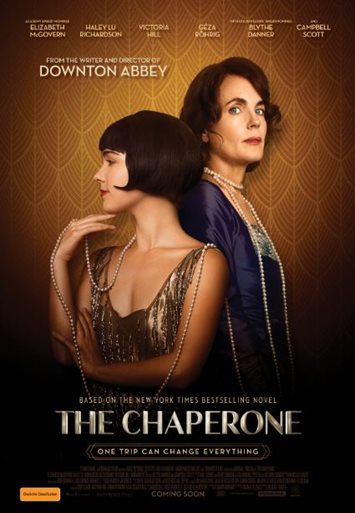 Not recommended under 13; parental guidance to 15 (Adult themes, sexual references).

Set in the prohibition era of 1922, The Chaperone is based on true events concerning the life of Louise Brooks (Hayley Lu Richardson), a dancer and silent movie actress. At the young age of 16, Louise was accepted into the Denishawn School of Dancing and Related Arts in New York. As it was unacceptable for a young girl to travel alone, she would have been unable to make the journey from her hometown in Wichita Kansas without the intervention of Mrs Norma Carlisle (Elizabeth McGovern) who offered her services as a chaperone.

Norma had her own reason for travelling to New York, which was to discover who her birth mother was. She had been brought up in an orphanage there and was adopted by a farming family in Kansas. There she met her future husband Alan (Campbell Scott), a lawyer, and lived a privileged lifestyle. Her marriage was not ideal however, and Norma discovers more on her journey than she could have imagined.

The Chaperone is a period drama set in the early 1920’s. It is beautifully portrayed, showing the vast contrast with life today, not quite 100 years on. The subject matter is quite heavy though with quite a lot of sexual references and other adult concepts and is therefore not recommended for children under 13. Parental guidance is also recommended for children aged 13 – 15.

The main messages from this movie are the need to find one’s identity and to believe in yourself.

This movie could also give parents the opportunity to discuss with their teenage children attitudes and behaviours, and their real-life consequences, such as.