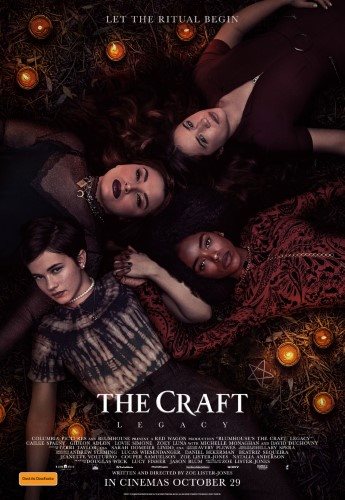 Not suitable under 14; parental guidance to 16 (violence, language, creepy scenes and themes)

Lily (Cailee Spaeny) moves to a small town with her mum Helen (Michelle Monaghan) who is recently engaged to a charismatic man, named Adam (David Duchovny), with three sons. After a terrible first day at her new high school, Lily is befriended by three outcasts – Lourdes (Zoey Luna), Frankie (Gideon Adlon) and Tabby (Lovie Simone) – who soon discover that Lily has powers and that she is the ‘fourth’ for whom they have been waiting in order to form a coven. While Lily is tormented by bullies at school and struggles to fit in to her new ‘family’ she and her new friends begin to explore the depth of their combined power. They cast a spell on Timmy (Nicholas Galitzine), a notorious bully, to make him get in touch with his feminine side and in the process find that he has turned from a tormenter into a friend. The night after Lily casts a love spell on Timmy he is found dead and when the others learn what she has done Lily is blamed for his death. Consequently, the girls swear off using magic and bind Lily from doing the same. However, Lily then discovers that her would-be-stepfather is actually a demon in disguise, intent on stealing her power for himself. A message from beyond the grave brings new perspective to the coven and helps them unite against an evil force, stronger than each of them individually, but no match for the combined force of their power, friendship and female spirit.

It is possible that some children over the age of thirteen may also be disturbed by some of the above mentioned scenes.

The Craft: Legacy is a supernatural drama that follows a similar, though far less violent, storyline as its 1996 predecessor. It showcases a very diverse cast and highlights messages such as the importance of friendship and the power of the female spirit. That being said, it is not a film for younger viewers and will be most enjoyed by an older teen and female audience.

The main message from this movie is that your differences are what make you powerful.