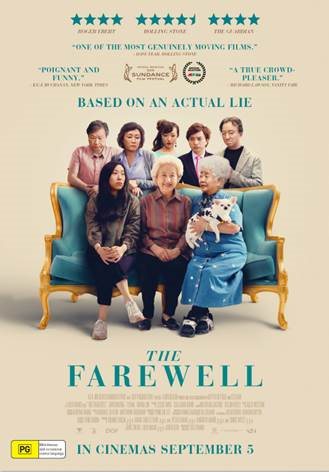 The Farewell is a drama comedy by Asian-American writer/director Lulu Wang. Living in New York, aspiring Chinese-American writer Billi (Awkwafina) maintains a close relationship with her Nai Nai (a term used to mean 'paternal grandmother' in Mandarin, played by Shuzhen Zhao) who lives in China. After receiving a rejection letter for a Guggenheim Fellowship, Billi learns from her parents that her beloved Nai Nai has been diagnosed with terminal lung cancer and only a few months to live. Billi is devastated by this news and becomes conflicted when she discovers the family is keeping the diagnosis secret from her Nai Nai. A hastily arranged wedding for Billi's cousin, Hao Hao (Han Chen) from Japan, has been planned in China as an excuse to unite the family together and spend what is expected to be one last time with Nai Nai. Billi’s father Haiyan (Tzi Ma) and her mother Jian (Diana Lin) fear that Billi will end up exposing the lie directly to her grandmother, so they tell her to stay behind in New York City.

Ignoring her parents' orders, Billi flies to Changchun. Although she assures her parents that she won't reveal the cancer diagnosis to Nai Nai, Billi shares her conflicted thoughts over the deliberate lying to her grandmother with the rest of the family, including Nai Nai’s doctor. Billi’s uncle explains that the lie allows the family to bear the emotional burden of the diagnosis, rather than Nai Nai herself and Billi later learns that Nai Nai told a similar lie to her husband when he was terminally ill.

Funny situations resulting from the wedding preparations lighten the underlying sadness of the family reunion. During the wedding reception, family members break down in tears on separate occasions but manage to proceed through the rest of the banquet as planned without raising Nai Nai's suspicions. The family maintain the lie and share their tearful goodbyes with Nai Nai before returning to their homes in Japan and America.

Parents should know that the film is predominantly in Mandarin with English subtitles used throughout.

The Farewell is a thought-provoking drama, based on a true story, shedding light on the differences between Eastern and Western cultural values, particularly the role of family. The movie is predominantly in Mandarin with English subtitles, therefore younger viewers may find it difficult to follow the story line. Although rated PG, the sombre themes of serious illness and grief make this movie more appropriate for children 12 years and up.