Fox and the Child, The 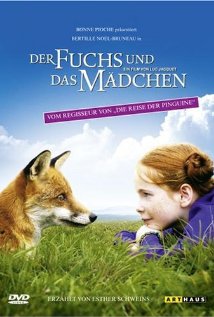 Narrated by Kate Winslet, The Fox and The Child depicts the development of an unlikely friendship between a ten year old girl and a notoriously sly woodland creature. On her way to school one autumn morning the child (Bertille Noel-Bruneau) has a chance encounter with a fox. She is captivated and her subsequent search for the fox is the beginning of a very unusual and hard won friendship.
Winter approaches and the child has not given up looking for her fox, even though she has not been seen since their first encounter. With the first snow fall the child finds hope as animal tracks are evident all over the countryside. She quickly spots and follows some fox prints but must give up before tracking it down, as there are wolves prowling about. She scrambles away, trying to avoid being seen by the wolves and falls and breaks her leg. The child is laid up for the rest of the winter and can only imagine what her fox is experiencing out in the world of shadows and snow and stars.
The arrival of spring brings with it new challenges: the human community has launched a campaign to eradicate the local fox population. Many burrows are blocked up, poison and traps are laid and any fox can be shot on sight. The child’s leg is healed by spring and she is back outdoors searching for her fox as diligently as ever. Her determination is soon rewarded and she sees her fox, which she decides to call Lily, and Lily’s cubs. The child’s constant presence in the woods becomes familiar and soon Lily is leading the child on adventures and taking her to parts of the forest she has never seen before. They watch over one another and protect each other in their own ways, but ultimately the child is still a child and the fox is still a fox.

The natural cycle of seasons, the balance of nature, unconventional friendships.

The Fox and the Child is a documentary type film featuring a charming performance by Bertille Noel-Bruneau, some fascinating insights into the world of a fox and stunning cinematography. It is a film that can be enjoyed by people of all ages, though younger children will probably have a lot of questions and teenagers who prefer action packed films may find this rather slow.
The main messages from this movie are that with enough patience and determination even unlikely friendships can be formed and also that some friendships are simply not meant to be.
Values in this movie that parents may wish to reinforce with their children include: