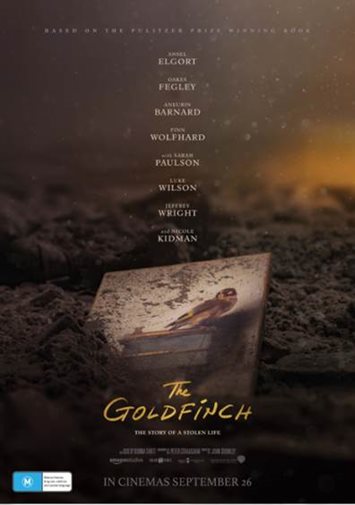 Not suitable under 16, parental guidance to 18 (heavy and frequent drug and alcohol use, themes, language, violence)

After his mother is killed in a terrorist bombing at a museum, young Theo (Oakes Fegley) is taken in by the Barbour family and Mrs. Barbour (Nicole Kidman) helps Theo as he struggles to come to terms with his loss. An unlikely friendship also develops between Theo and Hobie (Jeffrey Wright), an antique restorer, when a chance encounter after the bombing ensures that they should meet. When Theo’s father (Luke Wilson) and girlfriend Xandra (Sarah Paulson) suddenly appear in his life Theo knows going with them is not in his best interests. However, given no choice, Theo finds himself living with them in a deserted pocket of Las Vegas, surrounded by foreclosed homes and endless sand. It is in this wasteland that Theo meets fellow classmate Boris (Finn Wolfhard) and they strike up a friendship that will have long lasting and far reaching consequences on both their lives. When his father is killed Theo (played as an adult by Ansel Elgort) returns to New York where chance encounters once again change the course of his life and help him realise that sometimes something good can come from something bad.

There is heavy and frequent use of substances in this movie, including:

There is some coarse language in this movie, including frequent use of the words:

The Goldfinch is a drama based on the 2014 Pulitzer Prize winning novel by Donna Tartt. Performances are well acted and the plot will keep you guessing. This is not a family film and is best suited to older, more mature audiences.

The main messages from this movie are that something good can come from something bad, that people live and die and that fine art should live forever.