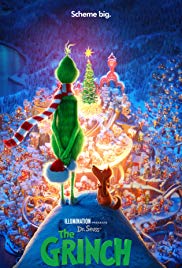 Parental guidance recommended for children under seven, due to scary scenes and some violence.

The Grinch is an animated movie based on the Dr Seuss book How the Grinch Stole Christmas, which includes a rhyming narrative by Pharell Williams.  The Grinch (voice of Benedict Cumberbatch) is a sad, miserable creature who lives in an isolated cave with his faithful dog Max. The Grinch watches in dismay while the town of Whoville comes alive with the joy and magic of Christmas. He is determined to destroy the fun and steal all the presents from the town. He enlists the help of Max and a large reindeer called Fred to disguise themselves as Santa and his reindeer to carry out his plan.

At the very last house, having stolen all the presents and destroyed all the decorations along the way, he meets a young girl called Cindy Lou (voice of Cameron Seeley). Cindy Lou had set a trap, determined to have a chat with Santa that night. The Grinch is touched by her sweetness and love for her mother, which have a great impact on him. He remembers his own childhood, spent in an orphanage with no family and no presents for Christmas, and understands why Christmas has always been the worst day of his life. He decides to put things right.

Cindy Lou’s friend Grouper practises setting a trap for Santa. In the process, he loses all his clothes and is covered by a strategically-placed cookie.

Adults raise a toast to Christmas.

The Grinch is a is a moving story about how loneliness can make a person envious and resentful of others but how kindness and forgiveness can change a person’s life around. It is a great family Christmas film, reminding us of what Christmas is all about, but there are a few scary scenes which could require parental guidance for younger viewers.