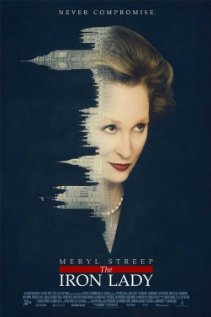 Not suitable under 10; not recommended 10-13; parental guidance recommended 13-15 (Violent and disturbing scenes)

The Iron Lady is a biography of Margaret Thatcher; Britain’s longest reining Prime Minister (from 1979 to 1990) and the first female Prime Minister in the western world.

Meryl Streep plays the adult Margaret Thatcher with Jim Broadbent as her husband, Dennis. The movie features Margaret Thatcher looking back on her life in old age. Snippets are shown of her youth and her political years from the perspective of her older self, showing her unapologetic push to rise in the political ranks and her controversial reign.

There is some coarse mild language in this movie, including:

The Iron Lady is a movie showing the rise of Margaret Thatcher; an ambitious woman rising through the ranks in a male dominated profession. Aggressive conflict scenes of both verbal and physical violence are balanced by more sensitive scenes of an older woman reflecting on her life.

Parents may also wish to discuss a number of issues raised by the film, including: