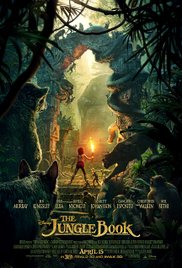 The Jungle Book is a film based on the short stories by Rudyard Kipling, as well as the Disney animated classic by the same title. It features a mixture of live action and CGI. The movie follows Mowgli (Neel Sethi), an orphan boy who is raised in the jungle by a pack of animals. Although most of the animals treat Mowgli as one of their own, a tiger named Shere Khan (Idris Elba) does not share their view – having been hurt and scarred by humans in the past, Shere wants to seek revenge by destroying Mowgli.

As Shere comes closer to succeeding in hurting the young boy, Bagheera (Ben Kingsley) and Raksha (Lupita Nyong’O) decide that Mowgli must be taken to a human village in order to protect him and ensure his safety. Mowgli sets out on a journey of self-discovery as a result, and attempts to evade Shere Khan’s attacks as he proceeds along the wild path to human civilisation. He meets many other animals along the way- some of them offer help and others who have their own malicious intentions.

Family and friendship, good versus evil, the animal kingdom, revenge

There is violence within the film:

Younger children in this age group may be scared by the above-mentioned scenes.

The Jungle Book is the latest version of an inspiring story based on the work of Rudyard Kipling. It is a mixture of live action and CGI. The realistic scenes of wild animals chasing Mowgli and fighting each other may be too scary for children under 8 and parental guidance is recommended for the 8 to 10 age group.

The film talks about the strength of family and friendship bonds. However, family is presented as a collection of individuals who want to protect and nurture each other, not necessarily a biological family. Audiences go on an adventure where they must determine, alongside Mowgli, who is worth trusting and who is not. The film demonstrates the consequences of revenge-seeking behaviour, with Shere remaining alone and unhappy at the end of the film.