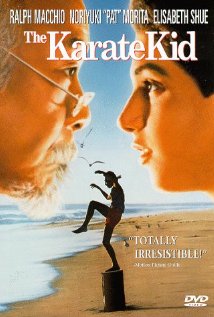 Not suitable under 8, not recommended 8-12, PG to 15 (Violence, Disturbing scenes, Themes)

Twelve year old Dre Parker (Jaden Smith) and his mother Sherry (Taraji P Henson) move from Detroit to Beijing. There they live in a new apartment building called 'Beverly Hills' and Dre attends the local school. While visiting a nearby park, Dre strikes up a friendship with Meiying (Han Wenwen), a young girl who plays the violin. However, Dre’s encounter with Meiying attracts the attention of the school head bully Cheng (Zhenwei Wang) and his gang who target Dre for attack.

It is soon apparent that Cheng is intent on doing serious injury to Dre, but Mr. Han (Jackie Chan), the maintenance man for Dre’s apartment building steps in. Mr. Han is a Kung Fu master and makes short work of the bullies.

Mr. Han then encourages Dre to go to the Kung Fu academy where Cheng is a student, in the hope that they can reason with Cheng through his instructor Master Li (Rongguang Yu). Unfortunately Master Li is just as big a bully as Cheng, and Mr. Han decides that the only way he can assist Dre is to enter him in a Kung Fu tournament where he will fight Cheng one to one.

From this point on the film focuses on Mr. Han teaching Dre Kung Fu and Dre’s blossoming relationship with Meiying, as the day for the Kung Fu tournament draws near.

The Karate Kid (2010) contains intense segments of graphic martial arts violence enacted by young boys against other boys, and also frequent bullying. Much of the violence shown could be imitated by children who might see Dre and other characters as role models. Other than some bruising, the film depicts no real life consequences that would result from injuries caused by the acts of violence; no blood or real injury are depicted. Examples of violence include:

The Karate Kid contains a couple of low-level swear words and mild put-downs. Examples include:

The Karate Kid (2010) is a martial arts action drama that is a remake of the 1984 film of the same name. It targets a preteen/early teen male audience, but the film’s level of violence, which is far more intense than that in the original film, makes it more suited to an older audience.