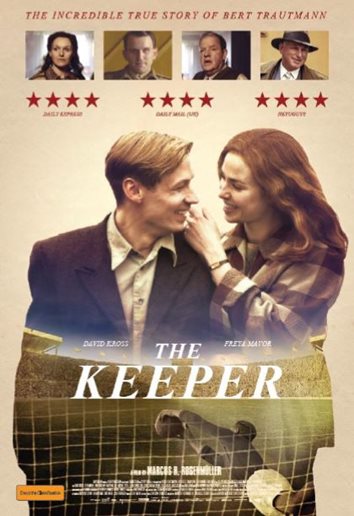 The Keeper follows the true story of famed German-English football player Bert Trautmann (David Kross), from WWII German prisoner of war in Northern England to goalkeeper for Manchester City.  While a POW in England, Bert’s natural aptitude as a goalkeeper is observed by local football manager Jack (John Henshaw), who recruits him to play for his losing team.  As Bert battles hostility from football fans and the general public alike, he and Jack’s daughter Margaret (Freya Mavor) begin to fall in love.  The story comes to a head during the infamous 1956 FA Cup Final in which Bert breaks his neck but plays on to help Manchester City win.

The Keeper is a semi-fictionalised account of German POW turned English soccer great, Bert Trautmann, detailing his rise to fame and personal story of love and loss.  While both heart-warming and funny at times, this film is often slow paced and clunky when trying to depict emotional highs and lows.  It is also important to note that The Keeper significantly downplays the role Bert Trautmann played in WWII as a Nazi soldier, and his participation in Nazi-affiliated organisations prior to his soccer career.  This film is not recommended for children under 8 and may distress children under 13.  Parental guidance is therefore recommended to 13, due to violence, themes of death and injury, coarse language, and sexual references.

The main messages from this movie are that we cannot move past bad experiences if we refuse to forgive those who have hurt us and to not judge a book by its cover.