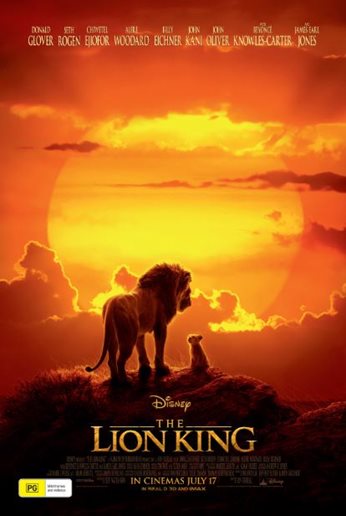 Not suitable under 6. Parental guidance to 9 due to themes and realistically animated violence between animal characters

After the death of Mufasa (voiced by James Earl Jones), King of the pride and father of young Simba (voiced by JD McCrary), the underhanded and scheming Scar (voiced by Chiwetel Ejiofor), brother of Mufasa, takes control of the pride with his gang of blood-thirsty hyenas (voiced by Keegan-Michael Key, Eric André, and Florence Kasumba).  After Simba is driven out of the pride by his uncle, he runs into the friendly and hilarious warthog, Pumbaa (voiced by Seth Rogan), and meerkat, Timon (voiced by Billy Eichner).  The trio live together for many years before Simba’s childhood best friend Nala (voiced by Beyoncé Knowles-Carter) arrives, pleading for the now grown-up Simba (voiced by Donald Glover), to return and overthrow Scar.  Despite feeling ashamed about playing a role in his father’s death, Simba agrees to return to challenge Scar and take up his role as the rightful king.

Death of a parent; Children as victims; Murder

The Lion King is a ‘live-action’ style animated remake of the 1994 classic of the same name.  While beautifully animated and with some fun new songs, this movie is essentially a shot-for-shot remake of the original without the same sparkle.  The highly realistic violence and themes in this computer-animated version of The Lion King may be distressing for younger viewers.

The main messages from this movie are about taking responsibility, being courageous even when things are difficult and getting support from your friends and family when you need it.