Man who knew infinity, The 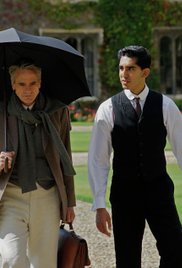 Not recommended under 10; parental guidance recommended 10 to 13 due to some scary scenes, violence , disturbing themes and possible lack of interest.

Srinivasa Ramanujan (Dev Patel) grew up in poverty in Madras, India, but is amazingly gifted with the ability to solve complex mathematical problems. He is persuaded by friends to share some of his work with academics from Cambridge University and is overwhelmed when he is invited to come to England by G.H. Hardy (Jeremy Lyons). Ramanujan arrives expecting to have his work published, but he is met with cultural imperialism at its worst.

Hardy insists that Ramanujan attend lectures to gain ‘academic rigour’, something very foreign to Ramanujan. He also requires Ramanujan to write proofs for all of his theorems, saying that otherwise they won’t be taken seriously. Hardy, along with Littlewood (Toby Jones) and Bertrand Russell (Jeremy Northam) are encouraging to Ramanujan but many of the traditional academic staff think that he’s nothing more than a charlatan. Ramanujan goes on to prove them wrong.

The man who knew infinity is a biographical drama about the life of the famous mathematician Ramanujan. It is very well portrayed and displays the open racism that regularly occurred in the early 20th century. It is interesting to see the contrast between life in Madras (now Chennai) and life at Cambridge University. There is some violence in the film which is relatively mild but could be upsetting for younger children, as could the film's themes of racism and fatal illness. The film would probably lack interest for most children under 13 and is more suited to older children, teens and adults.

The main messages from this movie are to persevere with what you know to be true and not give up in the face of adversity.

Values in this movie that parents may wish to reinforce with their children include determination, persistence and resilience. They may wish to discuss the racism seen in the film.