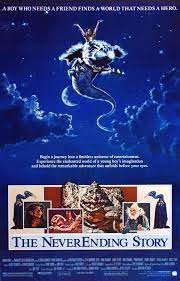 10 year-old Bastian (Barret Oliver) is a shy boy who lives alone with his father after the death of his mother. He is a loner and gets bullied at school. He finds solace in books, and one day, as he gets chased by the bullies, he escapes into a book shop. He is intrigued by a book that the owner is reading titled “The NeverEnding Story”, but gets told that this is no ordinary book, that it is dangerous, and that it is not for him. When the shop owner turns away to answer the telephone, Bastian steals the book and runs to hide in the attic of his school. Opening the mysterious book, Bastian is soon drawn deeply into its story about a magical world called Fantasia which is threatened with destruction by the all-consuming Nothing. At the same time, Fantasia’s leader, the Childlike Empress (Tami Stronach) is also suffering from an unknown, fatal illness. Fantasia’s only hope lies in a young warrior, Atreyu (Noah Hathaway), who is sent out to find a cure for the empress, and to stop The Nothing. Atreyu’s quest leads him to all parts of Fantasia, where he meets many new companions and fellow travellers, including the beautiful flying ‘luck dragon’. Together they face many challenges and dangers, and still there is no cure found. In his attic hideaway, Bastian gets drawn deeper and deeper into the story and with a shock he realises that he is more than just a passive reader or witness of the story. He might just be the chosen earthling child who alone has the power to save Fantasia and all its wondersome creatures from its demise.

Fantasy; Adventure; Supernatural; Death; Destruction of the environment; Bullying; The power of storytelling and language.

The NeverEnding Story is based on the first part of the acclaimed youth fantasy-adventure book of the same title by German author Michael Ende. Since its release in 1984, the movie has been a childhood classic for generations of families. Even though the special effects are a little dated by today’s standards, it remains a gripping and fascinating family fantasy tale, featuring relatable characters and heroes and important positive messages. Parents should be aware that there are some fairly dark and depressing themes in this movie, as well as some sad and scary moments, so it is best suited to children over 8 with  parental guidance to 10, particularly for sensitive children.

This movie could also give parents the opportunity to discuss with their children the importance of believing that every single person can make a difference, independent of age or status.