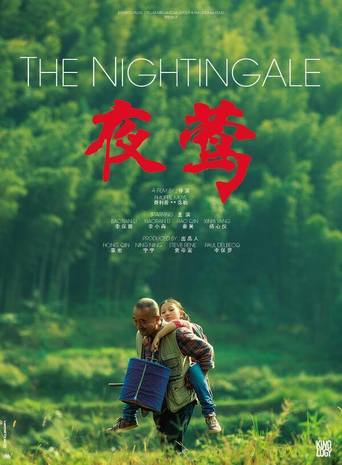 Parental guidance under 8; suitable for 8+ with adequate reading skills (in Chinese with English subtitles)

The Nightingale is a French and Chinese co-production with English subtitles. It follows the story of a young girl named Ren Xing (Xin Yi Yang). When her workaholic parents go away on a lengthy trip, Ren Xing is left in the care of her previously estranged grandfather Zhi Gen Zhu (Baotian Li). Zhi is a widower living in a small and modest apartment in Beijing. Ren Xing’s father initially expresses great concern over the arrangement, as Zhi had momentarily lost Xing in a crowded marketplace several years earlier.

Ren’s grandfather Zhi wishes to return to his hometown in the country, taking her along with him. Ren is initially presented as a spoilt and selfish child who does not wish to part with the comforts of modern living. On their journey, the two carry Zhi’s pet nightingale with them in a beautiful cage. Despite her negative feelings towards the trip, Ren eventually begins to warm to her grandfather after the two become lost one night in a forest. As their bond deepens, Ren finds herself wanting to stay with her grandfather because of the freedom she feels when living with him.

Children in this age group may be concerned about the following:

The Nightingale is a heart-warming story that takes place against the stunning backdrop of Guangxi in south-western China. It tells the story of Ren, a young girl who has been brought up in a highly consumerist society. She is used to living in comfort, and is quickly bored and needs constant stimulation via technology. The movie highlights the struggle she faces when her comforts are taken away, but also explores the rewarding nature of a life that is lived more simply. The film explores not only generational differences between Ren and her grandfather, but also a difference in values, goals and life experiences. Ultimately, the film shows that the freedom obtained in the peaceful countryside of Guangxi has far more to offer Ren than the fast-pace lifestyle she had been living before.

As The Nightingale is in Chinese with English subtitles, the film is best suited to children who can read well. However, it is a lovely film with beautiful cinematography and with parental guidance younger children may also enjoy it.

This movie could also give parents the opportunity to discuss with their children the impact of technology in our modern consumerist society, and how it can influence the health and wellbeing of individuals.