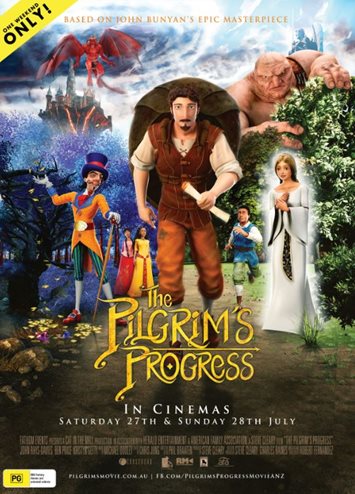 Not recommended under 8 (violence, scary scenes, themes), parental guidance to 13

In a desolate city of never-ending toil the descendants of Lux, a devilish creature, rule over the inhabitants, keeping order and ensuring no one ever ventures into the outer regions. One inhabitant, Christian Pilgrim (voiced by David Thorpe), finds a book left by an escapee of the city, Faithful Pathfinder. Disobeying orders to destroy the book, Christian discovers the book depicts the Celestial City and contains messages of hope and love, unlike anything he has ever known. The book speaks to Christian’s heart and, unable to convince his wife to join him, he leaves his family behind to journey to the Celestial City alone. Christian soon learns that this is not a journey he can make by himself and that help will always be given if called for. Despite clear instructions to stay on the straight path and follow the light, Christian finds that he can be easily mislead or deceived by false friends or flatterers intending to lead him astray or who are actually Lux in disguise. The journey is long and dangerous and far more difficult than Christian ever imagined. However, along the way he finds friends and meets fellow followers of the light, including Evangelist (voiced by John Rhys–Davies) who gives him direction, Hopeful (voiced by Justin Butcher) who gives him courage to follow the journey to the end and Faithful who demonstrates the value of life and sacrifice. As Christian faces frightening demons and fears he learns to have faith, to trust in the teachings of the book and to be grateful for the journey that is leading him home.

Faith, good vs evil, a father leaving his family, impending war, the carrying of burdens insecurities and fear, struggle through hardships and sacrifice.

The Pilgrim’s Progress is an animated adventure based on the book by Paul Bunyan. Despite its appearance this is not a film for young children. Older children and adult audiences will likely find much to discuss in terms of the powerful messages conveyed as well as some not so savoury concepts.

The main messages from this movie are to follow the straight path, to be faithful to the teachings of the King and to be vigilant against all the forces of evil that will undoubtedly block your path.