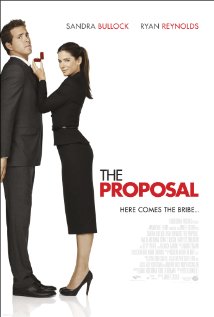 Margaret Tate (Sandra Bullock) is a high powered executive with a publishing firm. She has an executive assistant Andrew Paxton (Ryan Reynolds) whom she bullies and intimidates. Andrew is desperate to be an editor and puts up with all of her behaviour so that he can achieve his dream.
Margaret finds that because she is not a US citizen and has travelled without a visa, she is now going to be deported. Her solution is to ‘marry’ Andrew. Suddenly the boot is on the other foot. Margaret has to agree to conditions which are set by Andrew so that he will go through with the wedding. She also has to spend the weekend with his family in Alaska and attend his Grandmother’s 90th birthday.
The trip has surprising results where both Andrew and Margaret learn something about themselves and each other.

There is no violence of concern

Sandra talks briefly about losing her parents at 16. Some children may be disturbed by this.

Some children in this age group may also be disturbed by the idea of Sandra losing her parents at 16.

Some children in this age group may also be disturbed by the idea of Sandra losing her parents at 16.

There is some coarse language in this movie, including:
‘shit’, ‘Jesus,’ ‘boobs’ ‘bitch’, ‘balls’

The Proposal is a romantic comedy focusing on the developing relationship between two people who initially are antagonistic towards each other.
Values in this movie that parents may wish to reinforce with their children include: