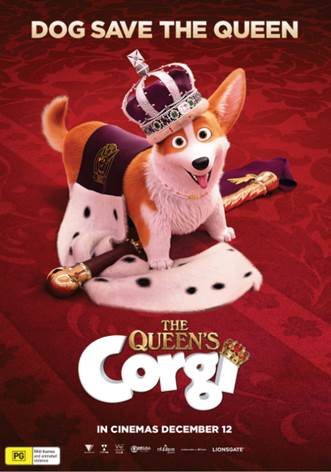 Not suitable under 10; parental guidance to 13 (Adult concepts, Violence)

The Queen of England (voice of Julie Walters) receives a corgi puppy as a present from Prince Phillip (Tom Courtenay) that she names Rex (Jack Whitehall). Rex soon becomes her favourite, much to the annoyance of the older dogs, Nelson (Anthony Skordi), Margaret (Lin Gallagher) and, particularly, Charlie (Matt Lucas). Rex is quickly elevated to top dog but falls from favour when, at a state dinner for the visiting US president, he bites Donald Trump (Jon Culshaw) in the ‘unmentionable place’.

Charlie sees this as his opportunity and suggests to Rex that they run away to live in the Pope’s palace. Rex is unsure about leaving his palatial lifestyle, but Charlie persuades him. Charlie, however, has other plans and pushes Rex off a bridge into freezing water. Fortunately, Rex is saved but he ends up in a dog pound. There he meets Wanda (Sheridan Smith) who he instantly falls in love with but Wanda belongs to Tyson (Ray Winstone), a large Pitbull. Tyson runs a fight club which Rex gets initiated into. Rex eventually manages to escape with the help of Wanda and the other dogs, but still has a long way to get back to Buckingham Palace.

Nothing of further concern.

The Queen’s Corgi is an animated comedy based on real people. Parents should be aware that the movie contains adult concepts, disturbing scenes and gender stereotypes which make it unsuitable for children under 10. Older children might find it entertaining but parental guidance is recommended to 13.

The main message from this movie is that you can achieve more together than alone.