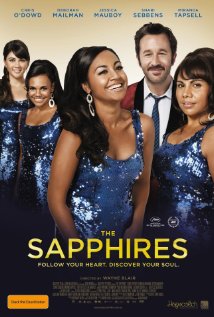 Not recommended under 11, PG to 13 (Violence; themes and sexual references)

Set in 1968, The Sapphires is based on the true story of four Indigenous Australian singers. Sisters, Cynthia, Gail and Julie (Miranda Tapsell, Deborah Mailman and Jessica Mauboy) leave their family in the country after being discovered by Dave Lovelace (Chris O’Dowd). The girls, together with Dave, head for Melbourne and are joined by their cousin, Kay (Shari Sebbens) to audition for a job to entertain the American soldiers fighting in the Vietnam War. Before long, ‘The Sapphires’ arrive in Saigon and are confronted by the contrast between the vibrant and buzzing city and the surrounding horrors of war.

The girls’ talent shines and they move from performing in bars to travelling on the road to perform for the soldiers in various army bases. As they travel through the Vietnamese country side, within combat zones, the girls and Dave all have their own learning to do about life, love and identity.

The Sapphires is based on the real life story of four courageous Indigenous Australian women who, in an era of significant racial discrimination, used their talent overseas to entertain American soldiers. It is entertaining and the story has many discussion raising aspects for older children. However, there are themes and disturbing scenes which make it unsuitable for children under 11.

The main messages from this movie focus around the issue of identity. All of the girls come to an understanding of their role within their group. Gail understands her role as ‘mumma bear’ looking out for her younger siblings and cousin and how this is connected to the guilt she carries from her childhood where she was unable to protect Kay from the government officials. Kay has lived in both the indigenous and ‘white’ worlds and has to decide where her heart belongs. Dave also finds himself along the journey. He feels that he has failed in his life as a musician and a husband and has given in to drinking and wasting his life away. Gail forces him to confront these ‘failures’ and he realises that there are more important things to work for.