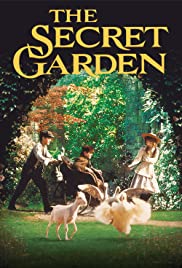 Not suitable under 6; parental guidance to 7 (heavy themes of death, grief and illness)

1901, India: The Lennox's are a wealthy British couple living in India, where they mostly enjoy the colony's high society glamour and party life. Their 10 year-old daughter, Mary (Kate Maberly), is rich when it comes to wealth and attention of servants but deprived of parental love and attention, or friendships with other children, which has turned her into a spoilt and angry girl who is unable to cry. When her parents die in an earthquake, Mary is sent back to Yorkshire, England, to live with her uncle, Lord Archibald Craven (John Lynch). Craven is a lonesome and grief-stricken man ever since, ten years ago, his beloved wife – twin sister of Mary's mother – died. He spends most of the time away, and leaves head housekeeper Mrs. Medlock (Maggie Smith) in charge. While exploring the Manor, Mary discovers her late aunt's room, and in it a key that unlocks the door to a secret garden. A gardener tells Mary that this was her aunt's garden, and after she died Lord Craven locked it up and forbade anyone to ever enter it again. And this is not the only secret Mary discovers: following mysterious crying and whining, she finds that she has a same-aged cousin, Colin (Heydon Prowse), who has been spoilt and wrapped in cotton wool all his life, to the extent that he has never left his room, is too weak to walk, and believes that he is very ill and going to die soon. Both spoilt, lonely, and confused in their own ways, the two cousins become friends, and it does not take Mary long to challenge Colin to discover his mother's secret garden, and along with it an entire new world of possibilities.

The Secret Garden is a 1993 adaptation of the popular 1911 children's novel of the same title, written by Frances Hodgson Burnett. It is a story about self-discovery and personal growth, as well as about the importance of family and friendship. Positive role-models and messages make it a film worth watching for a family audience. Compared to modern standards, the sedate pace, lack of loud and fast action, and the presence of rather heavy themes may pose a challenge to young, modern viewers that is worth tackling. Lack of interest and heavy themes make it unsuitable for children under 6 and warrant parental guidance for children aged 6 and 7.

The main message from this movie is that "if you look the right way, the whole world is a garden".

This movie could also give parents the opportunity to discuss with their children the power of the mind: for a long time, Colin believes that he is weak and terminally ill, which leaves him completely dependent, bed-bound, and miserable. His life turns around and he starts healing physically and emotionally once he finds the courage and determination to challenge himself.