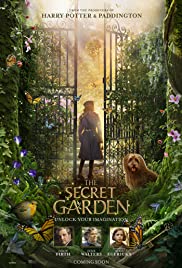 Set in 1947, The Secret Garden is based on the novel by Frances Hodgson Burnett. On the eve of partition between India and Pakistan, Mary Lennox's (Dixie Egerickx) parents are tragically killed. Mary wakes to find her house in disarray and with no-one else around. As an orphan, she is taken to England to live with her Uncle Archibald Craven (Colin Firth) by the formidable Mrs. Medlock (Julie Waters). Mary arrives to find a house in mourning. She is told she must stay in her room and not wander around the large mansion. At night she hears cries from somewhere in the house and goes to investigate. There she discovers her cousin, Colin (Edan Hayhurst), who is disabled and bedridden.

Colin is at first reluctant to make friends with Mary, having lived in isolation for a very long time, but he gradually lets his defences down. The two become firm friends and Mary persuades him to venture outside of the house. In her solitary time, Mary had discovered the secret garden to which she was led by a garden robin. Mary had also made friends with a dog, she named Jemima and a boy called Dickon (Amir Wilson). Mary introduces Colin to her friends and shares the delightful and magical garden with him. Colin's spirits are lifted by his new experiences and gradually he regains the use of his legs. When Uncle Archibald discovers what has happened, he is at first enraged, but soon comes to realise that Mary's influence on Colin has been to his benefit.

The Secret Garden (2020) is a remake of the classic film and book by Frances Hodgson Burnett. The movie is quite grim a lot of the time, however this contrasts well with the colourful beauty of the secret garden. In this interpretation of the story, the garden is more magical than secret and there are many appearances of Mary's Mother and Aunt who appear in supernatural form to help and guide Mary and also the Uncle on occasion. It is very well acted by all characters but the themes and content of the movie make it unsuitable for children under 8. Parental guidance is also recommended for children aged 8 – 10.

The main messages from this movie are to not be consumed by tragedy but to overcome loss and grief, and learn to live in the present.