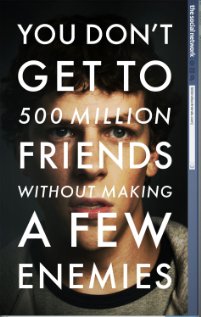 Not recommended under 15 (Drug and alcohol use, Sexual references, Coarse languages)

The film’s main story is presented through a series of flashbacks as seen through the eyes of various witnesses giving evidence in a civil court proceeding.

In the autumn of 2003 Mark Zuckerberg (Jesse Eisenberg) is a computer genius in his sophomore year at Harvard University and is on a quest to “do something substantial” that will gain the attention of Harvard’s elite. While drunk in his dorm room one night, Mark hacks into secure Harvard university files, steals student ID photos and then creates an on-line game that rates Harvard’s female students in terms of their “hotness”. As a result of his actions Mark receives a degree of fame and notoriety, and before long is approached by Harvard seniors Tyler and Cameron Winklevoss (both played by Armie Hammer). The Winklevoss twins have an idea for developing a social network for Harvard students and seek Mark’s assistance. However, instead of developing a social network system for the Winklevoss brothers, Mark and his best friend Eduardo Saverin (Andrew Garfield) develop and launch their own network called “the facebook”, which quickly spreads from Harvard to a number of other elite universities across the country, attracting the interest of Napster creator, Sean Parker (Justin Timberlake).

As his social network becomes the globally recognised Facebook, Zuckerberg is sued by the Winklevoss brothers for stealing their idea and by Eduardo, who believes he has not received full recognition and payment for his role in the network’s creation

The Social Network contains occasional low-level physical violence and some psychological violence enacted via the internet. Examples include:

The Social Network contained a number of sexual references. Examples include:

The Social Network contains drug use throughout. Examples include:

The Social Network contains course language and putdowns throughout. Examples include:

The Social Network, based on real events, is a drama about creative genius, friendship and greed. While the film targets young adults and older adolescents, it may also appeal to younger teens who are Facebook users. Parents of this age group may be particularly concerned about the film’s portrayal of drug and alcohol use.

Parents may wish to discuss the consequences, legal and otherwise, of misusing on-line social networks, and the psychological damage that can be caused through cyberbullying.