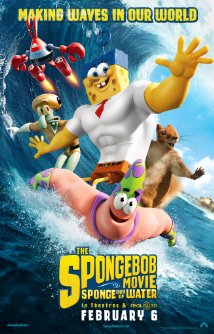 Not recommended under 6, parental guidance recommended 6-10 due to violence and scary scenes.

Burger-Beard the Pirate (voice of Antonio Banderas) discovers a magic book that tells the story of Bikini Bottom and realises that whatever he writes in the book comes true. When he sees the success of the Krusty Krab and its famous Krabby Patties, he wants to steal the secret recipe. The Krusty Krab is owned by Mr Krabs (Clancy Brown), a rather greedy crab who likes making lots of money. SpongeBob (Tom Kenny) works there as a burger flipper along with Squidward Tentacles (Rodger Bumpass) the cashier.

Burger-Beard isn’t the only one who wants to steal the recipe. Plankton (Mr Lawrence) the owner of the rival café Chum Bucket, also wants the recipe. In his attempt to steal it from the vault it magically disappears, taken out of Bikini Bottom by Burger-Beard. Bikini Bottom descends into chaos and anarchy and SpongeBob knows he must get the recipe back to save his ocean home. He makes a time machine with Plankton and together they go back in time to stop the recipe disappearing. However, in order to restore order to Bikini Bottom they need to travel to the real world and find Burger-Beard.

There is quite a lot of cartoon style violence in this movie. Most is played for comedy but some of is likely to disturb young children or need explanation. Examples include:

None of concern in the movie but plenty of associated merchandise

Plenty of girls in skimpy bikinis

There is some mild coarse language in this movie that children may imitate, including:

The SpongeBob Movie: Sponge out of water is an animated comedy action movie based on the TV character and aimed at children. The high level of violence and scary scenes however, make it unsuitable for children under 6 and parental guidance is recommended for 6 to 10 year olds. It is more intense in the 3D version.

The main messages from this movie are that more is achieved by working as a team.