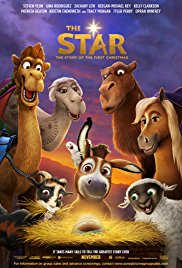 Not suitable under 5; parental guidance to 8 (violent and scary scenes)

The Star tells the story of the events surrounding the birth of Jesus from the perspective of the donkey. Bo (voice of Steven Yeun) is a common mill donkey in Nazareth who is fed up with his daily tasks, and longs to escape and see the world. With encouragement from his friend, Dave (voice of Keegan-Michael Key), a hilarious and ambitious dove, Bo manages to escape from the mill. After being chased by the furious mill keeper, Bo injures his foot and seeks refuge in a humble house in the village. Here he meets the young, pregnant Mary who takes pity on the little donkey and decides to keep him as a pet.

Meanwhile, the evil King Herod has heard rumours of the prophecy of a new king being born and decides that he must find and murder this baby that threatens his claim to the throne. He decrees that all citizens must travel to Bethlehem to register in a census, hoping that this will reveal the baby. One of King Herod’s henchmen, a large and threatening soldier with two vicious dogs, is sent out to search for the expectant couple.

As Mary and her young husband Joseph set off on foot to Bethlehem, Bo decides that he must follow them and warn them about the danger. With Dave the dove and his new friend, a sheep called Ruby (voice of Aidy Bryant), Bo has a perilous time trying to save Mary and Joseph from being found and helping get them safely to Bethlehem before the holy birth.

The Star is an entertaining adventure story which tells the story of the Nativity from a new angle with humour and warmth. The main message from this movie is to teach children about the Christian origin of Christmas. Values in this movie that parents may wish to reinforce with their children include bravery, friendship, ambition and forgiveness.