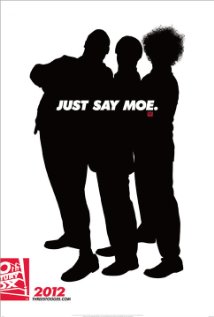 Not recommended under 5, PG to 12, due to the incessant violence.

The Three Stooges, written and directed by Bobby and Peter Farrelly, is a contemporary take on the 1940s – 1960s slapstick comedy trio’s antics.  The (complicated) story is presented in three acts, which are designed to resemble the original format of the Stooges’ short films.  The first segment, titled, More orphan then not, opens when Moe, Curly and Larry  are dumped as babies, in a sack outside the Sisters of Mercy (Catholic) orphanage.  At first the nuns consider the three babies a gift from the angels but later realise that the three unusual children will be a liability.  Years pass and the accident-prone boys remain at the orphanage, as their strange appearances and dispositions frighten off potential adoptive parents.  Finally, when the brothers reach the age of ten, Moe is selected for adoption.  However, after he insists that his prospective parents also take on Curly and Larry, the couple decide to swap him for another orphan, Teddy (Kirby Heyborne).  At this point, the film jumps 25 years into the future, when 35 year old Moe (Chris Diamantopoulos), Curly (Will Sasso) and Larry (Sean Hayes), who still live at the orphanage, discover that the institution is almost bankrupt and will be closed unless its debts of $830, 000 can be paid.

The second act, The Banana Split, depicts the Stooges leaving the orphanage to raise the required money.  After forming a picket line to advertise their desire to find paid work, Moe, Curly and Larry are approached by a couple who wish to hire them for a contract killing.  The female (Sofia Vergara), who does not identify herself, explains that her husband is terminally ill and wants The Stooges to kill him in order to prevent any further suffering. While the group are still discussing the dubious proposition, the Stooges accidentally bump the woman’s “husband” (Craig Bierko) who then falls under a bus and is almost killed.

In the final act, No Moe Mister Nice Guy, the Stooges are depicted still roaming the streets in search of ways to raise money for the orphanage.  One day, they happen to meet up with Teddy (Kirby Heyborne), their childhood friend who was adopted in Moe’s place.  When Larry realises the men are essentially homeless, he asks them to come and stay with him, but Moe still resents Teddy, and so refuses.  This decision leads to a heated argument, after which Moe decides to leave Curly and Larry.  In a bizarre turn of events, viewers discover that the whole fight was witnessed by television producers who then invite Moe to join the set of a new reality TV show.  While Moe is gaining celebrity status, Curly and Larry stumble onto the sinister truth about the secretive couple they met earlier.  Curly and Larry then decide to find and reunite with Moe, so that they can all work together to help save Teddy, who they realise is in grave danger.

In the tradition of slapstick comedy, this film involves almost unceasing physical and verbal violence. Parents may be concerned that younger children may imitate this violence. Examples include:

No products are displayed or used in this movie, however there is a verbal reference to Fosters beer, and a Guinness baseball cap is shown.  In addition, Andy Warhol-style pop art is displayed, and there are verbal references to the film Starwars and the TV shows The Kardashians and Jersey Shore. There is also one musical scene involving a singing nun, which is reminiscent of the Sister Act films.

There is no coarse language as such in this film, however several put-downs and some threats are used, including:

The Three Stooges is a slapstick comedy, which contains a great deal of violence.  While many of the violent episodes are humorous, and quite true to the style of the original Three Stooges films, parents may not see the constant punching, slapping and eye-gouging as appropriate viewing for children.  It is likely that many young children will not be able to see beyond these aggressive displays to grasp the underlying message about loyalty and teamwork.

At the close of the film, directors Peter and Bobby Farrelly appear for a brief discussion about the ways that the violent stunts were performed, and stress that audience members should not try to emulate such actions.  Nevertheless, even this direct message is unlikely to be enough to counter the previous 86 minutes of unrestrained aggression that audiences have been encouraged to laugh at.

The actual outcomes of fighting and aggression, in contrast to the cartoon-like sequences in the film, which did not accurately depict the consequences of such actions.  Parents could discuss other, non-violent means of conflict resolution and the benefits of learning how to share and work together.