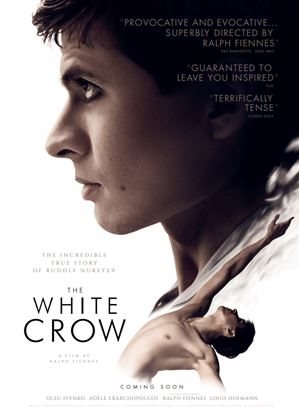 Not recommended under 13; parental guidance to 15 (adult themes; nudity)

Rudolf Nureyev (Oleg Ivenko), born into poverty and raised in war-torn USSR, falls in love with ballet as a young boy and, with the help of his ballet instructor Pushkin (Ralph Fiennes), struggles his way to the top of the ballet scene in Russia. While in his early 20s, Rudolf and his ballet company take a trip to Paris, during which he becomes enamoured by the freedom and beauty of the ‘Western World’.  As his fame skyrockets, Rudolf becomes increasingly less willing to play by his Russian handlers’ rules; staying out late and fraternising with “foreigners” from the ‘West’.  As the company prepares to depart on their next trip to London, Rudolf is stopped by his Russian handlers and KGB agents who claim he must instead fly to Russia to perform at a ‘Gala’.  Knowing that his behaviour in Paris has led the Soviet government to see him as a threat and are likely to jail or kill him, Rudolf does the only thing he can - he defects

The White Crow is a biopic of the late Rudolf Nureyev – one of the greatest male ballet dancers of his generation – which details his rise to fame and subsequent defection from the USSR to the ‘West’.  Presented mostly in Russian with English subtitles, this film has a number of strong moments and performances, particularly that of the character Rudolf, but lacks both good pacing and a strong narrative.  This film is not recommended for children under 13 due to frequent nudity, adult themes (particularly related to the defection sequence), and lack of interest – Parental guidance is recommended to 15.

The main messages from this movie are that hard work and perseverance are important to succeed; and to be true to yourself, even if it means going against the ‘rules’.