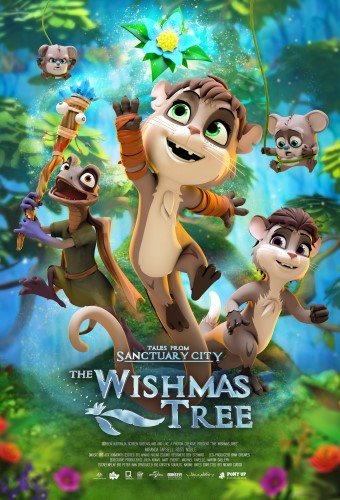 Not suitable under 5; parental guidance to 9 (scary scenes, violence and themes)

Kerry (voice of Miranda Tapsell) is an adventurous ringtail possum who lives in a safe city, protected from the bloodthirsty beasts living in the wild. Yet the wild is what she really wants to see. When the wish Kerry casts upon the Wishmas Tree does not appear to be fulfilled she decides to ignore the cautions of Yarra (voice of Ross Noble), the tree’s ancient guardian, and pluck the last flower to make another wish in the hope that this time it will be granted. Kerry’s selfishness causes a climate shift and the Wishmas Tree begins to wither and die. Upon witnessing the suffering she has inadvertently caused, Kerry sets out with Yarra and is soon joined by her cautious sister Petra (voice of Kate Murphy). Together they journey into the wild to find the first Wishmas Tree and to wish upon another blossom that might save them all from the evil forces of extinction. Along the way they face their fears, encounter creatures just as frightened as they are, become champions for good and learn to believe in the impossible.

The Wishmas Tree is an animated adventure featuring a number of dark and violent scenes. Due to the nature of some of these scenes the film is most suitable for families with slightly older children.

The main messages from this movie are that we are stronger when we are together; we are never too old to believe in magic; and it is not how we make mistakes, but how we correct them that defines us.