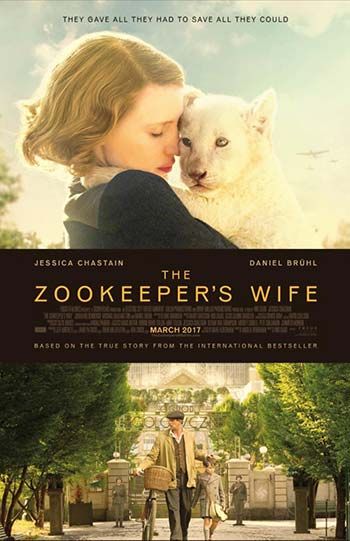 The Zookeeper’s Wife is based on the true story of Antonina (Jessica Chastain) and Jan (Johan Heldenbergh) Zabinski, the owners of the Warsaw Zoo, who helped save hundreds of people from the death camps of World War II.

Antonina and Jan are friends with Lutz Heck (Daniel Bruhl), a German zoologist and director of the Berlin Zoo. Lutz is obviously attracted to Antonina, which impacts the events of the story. When war breaks out, the Warsaw Zoo is badly bombed resulting in the death of many of the animals. Lutz, now a member of the SS, offers to take the prize stock back to Berlin, where he thinks it will be safer.

Meanwhile all the Jews in Warsaw are being rounded up and placed in the Warsaw Ghetto. The Zabinskis have Jewish friends Magda (Efrat Dor) and Iddo (Maurycy Fraenkel) and agree to hide Magda in the basement of their home while Iddo is sent to the ghetto. Jan devizes a plan to farm pigs, which Lutz grants him permission to do. He is also allowed to enter the ghetto to collect food waste to feed the pigs. This is a ruse to bring out the children, hiding them underneath all the rubbish. As the war progresses, and events unfold, the Zabinskis manage to bring out adults, as well as children, including their old friend Iddo.

Jan eventually joins the resistance fighters leaving Antonina and their son Ryzard (Timothy Radford and Val Maloku) to manage on their own. Antonina takes advantage of Lutz’s affections to continue helping people to escape from the ghetto right under the Germans’ noses.

The Zookeeper’s Wife is a true drama story of heroic and brave people that helped others escape from the horrors of Nazi occupied Warsaw. The story is very powerful and well told, however it is quite intense and covers very distressing material. It is therefore not suitable for young people under 15.

The main messages from this movie are the importance of standing up for what you believe in even at great cost to yourself and to oppose evil when it arises.