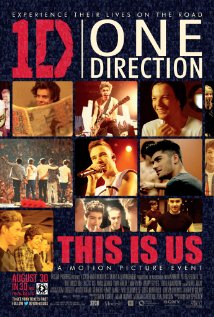 This is the story of five boys, Niall, Liam, Zayn, Harry and Louis who all auditioned for the X Factor but failed to win. Simon Cowell, the producer, decided to put them together to form a band called One Direction and the rest is history. They became an overnight sensation and gained international recognition in unprecedented time.

The film follows them on a worldwide tour to European, American and Japanese cities where fans throng to see them everywhere they go. In scenes reminiscent of Beatle mania, hysterical teenage girls in their thousands fill the auditoriums. The group members themselves are likeable boys having the time of their lives.

There is some tomfoolery amongst the boys but none of ill intent.

Harry talks about his first kiss with a girl that got 'pretty steamy'.

There is some coarse language in this movie that younger children may imitate, including:

This is Us is documentary showing how five boys from humble backgrounds have reached the highest point of stardom without seemingly being affected. It features plenty of music and performances which will certainly appeal to One Direction fans. It is likely to lack interest for children under five and there is some language that may be imitated by young children.

The main messages from this movie are to be grateful for success and to acknowledge and share that success with others.