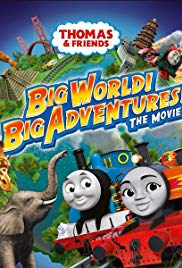 Parental guidance under 6 due to some scary scenes. Lacks appeal for older children

This is the latest in the series of movies based on the books by the Rev. W. Awdry. Thomas (voice of John Hasler) is tired of being teased for being too small, and of his menial job. One day he nearly gets hit by a mad racing car called Ace (Peter Andre) who challenges Thomas to a race. Thomas greatly admires Ace who is reckless and carefree. Ace tells Thomas he should join him on the rally trail which will take him all over the world. Thomas longs to do this and asks for permission from Sir Topham Hat (Keith Wickham).  Sir Topham, believing it will be impossible, agrees. Thomas takes this a yes, and sets off across the world.

Thomas lands in Senegal in Africa and soon learns that Ace is not a reliable friend. His journey continues on and in Kenya he meets Nia (Yvonne Grundy), who helps him take some coffee trucks to Dar es Salaam. Together they travel over five continents where they have many adventures and get into some dangerous situations. Along the way Thomas learns some valuable life lessons.  He realises that it is more important to have a good friend who can help you than it is to be a ‘free spirit’ who has no care or thought for others and just wants to have fun.

Some younger children in this age group may also be scared by some of the above-mentioned scenes.

Nothing of concern in the film, but plenty of associated merchandise.

Thomas and friends: Big world! Big adventures! The movie is a travel adventure film made for young children. Thomas and Nia go to many exotic destinations such as Senegal, Dar es Salaam, Rio de Janeiro, San Francisco and the Rainbow Mountains in China. This presents young viewers with a diversity of culture and geographic locations. There are some scary tense moments, however, so parental guidance is recommended for young children.

Parents may also wish to discuss how driving recklessly will often end up with someone getting hurt. Car racing, which is made to look cool and heroic, needs to be kept to a racing track not on roads.