Thomas and friends: Tale of the brave 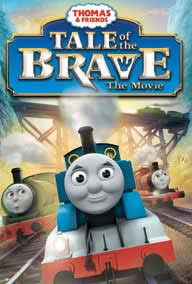 Parental guidance recommended under 6 due to some scary scenes.

Thomas and friends: Tale of the brave is a special feature-length instalment from the Thomas the Tank Engine animated series. The film follows Thomas (voice of Martin Sherman), the cheeky but good-hearted tank engine who is working at the Clay Pitts in the land of Sodor. After a storm suddenly arrives and the rain makes the cliffs unstable, a flash of lighting reveals what appears to be giant footprints.  However, a landslide prevents Thomas from exploring the situation further, and he is hurried to safety by his friends Ben and Bill just in time.

Thomas tells his colleague Percy who then becomes convinced that a monster is residing on the island. His fear grows until he is too scared to pull the Mail Train at night. A strange and foreign engine suddenly appears, and Percy begins to believe that the new engine, called Gator, is the monster. However, after much teasing from his friends and getting to know Gator, Percy discovers a wonderful friend and ally.

Young children may be scared by some scenes in this film, particularly if viewed on a large cinema screen rather than on a television at home

Younger children in this age group may also be scared by the idea of a monster and scenes of glowing eyes in the dark.

Thomas and friends toys and other associated merchandise

Thomas and friends: Tale of the brave is a motivational and heart-warming animated film that depicts the importance of being brave and pushing your own personal boundaries. It demonstrates that being brave and having courage isn’t about not being afraid, but about being able to act despite being afraid. It highlights that it is sometimes necessary to do things you do not want to do, because in the end, those actions may make you a stronger person. Conversely, avoidance can lead to an issue becoming worse.

Under sixes may find some of the scenes a bit scary, while the film probably lacks interest for most children over 10.