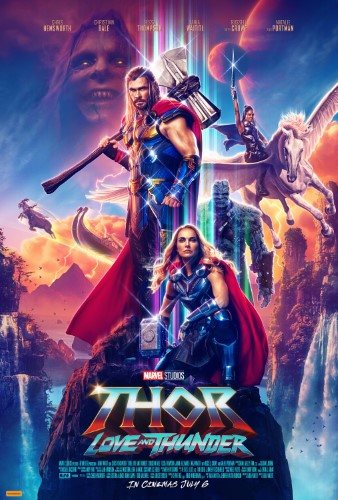 Thor (Chris Hemsworth) has never moved on after his breakup with renowned scientist and author, Jane Foster (Natalie Portman). While he fights alongside the Guardians of the Galaxy, defending persecuted planets and cultures, he struggles to find a deeper meaning to his life. When the Guardians receive thousands of calls for help, Thor and Korg (Taika Waititi) split from the rest to go and help an old friend. Amidst the devastation, they learn that Gorr, (Christian Bale), a devoted father turned god killer, is on a mission to exterminate all the gods. Meanwhile, Jane is fighting a losing battle with stage 4 cancer. In her search for answers and for something to help her heal, she responds to a summons from Thor’s hammer and is transformed into The Mighty Thor. She suddenly finds herself fit and strong and able to join Thor in his battle against Gorr, who has come to Asgardia to finish Thor off and take his axe, Stormbreaker (a weapon forged by Thor), which will help him open a door to Eternity where any wish he makes will be granted. When Gorr sees that he is losing the battle in Asgardia, he abducts all the children from the village to try to lure Thor to the Shadowlands. Thor, with assistance from King Valkyrie (Tessa Thompson) and The Mighty Thor, sets out for Omnipotent City to seek the gods help to save the kids and defeat Gorr. They soon learn through Zeus’s (Russell Crowe) example, that the gods are only interested in helping themselves and that they must set off alone if they are to save the children. With King Valkyrie gravely injured and Jane’s cancer rapidly progressing, Thor finds an army in the children he was trying to save and with their help he manages to defeat the dark monsters but not before Gorr opens the door to Eternity. It is in this eternal realm that the unexpected takes place and though death visits twice, ultimately life prevails.

Revenge; Murder; Kidnapping; Death of a child; Cancer; The renouncement of religion and Gods.

Thor: Love and Thunder is the fourth Thor movie from Marvel Studios. The film features fabulous special effects and interesting characters. While the film definitely has a humorous side, there are some pretty intense scenes that will be too dark and scary for younger children. The film is best suited to older teens and mature or adult audiences.

The main messages from this movie are that we should live life to the fullest as none of us know how long we have or what tomorrow holds; that we should keep our hearts open and seek love because that is all any of us really wants; and that there is no greater power than helping those in need.