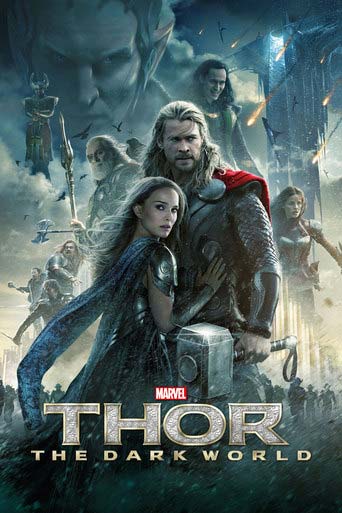 Thor: The Dark World opens with a prologue describing events set one thousand years in the past. Thor’s grandfather and an army of Asgard soldiers engage in a fierce battle with a demonic army of Dark Elves lead by the vengeful Malekith (Christopher Eccleston). Malekith has created an evil power called the Aether which he intends on using to plunge the Nine Realms into chaos and darkness. Luckily for the Nine Realms, the Asgard army triumphs, Malekith is banished and the evil Aether is hidden deep in the depths of an un-named planet.

One thousand years later, Thor’s brother Loki (Tom Hiddleston) has been imprisoned on Asgard (for crimes committed in the first Thor film), and the Nine Realms are about to come into alignment. This happens once every thousand years and results in all manner of strange phenomena, such as the temporary opening of doorways between realms. Unluckily, the film’s heroine astrophysicist Jane Foster (Natalie Portman) is accidentally transported through one of these doorways, discovers the hidden location of the long lost Aether and becomes an unwitting host of the demonic power.

After being made aware of Jane’s disappearance, Thor (Chris Hemsworth) travels to Earth and, much to the annoyance of Thor’s father King Odin (Anthony Hopkins), brings Jane back to Asgard where it is discovered Jane has become host to the Aether.

Jane’s possession by the Aether reawakens the banished Malekith and his army of Dark Elves, who wreak death and destruction when they attack Asgard in a bid to retrieve the power. Thor and Loki now battle Malekith across the Nine Realms as they attempt to defeat him before he can use the Aether to destroy the universe.

Mythology; superheroes; treason and betrayal; death of a family member

The film contains intense sequences of action violence, at times brutal, but minimal blood and gore are depicted. There are scenes depicting multiple and mass deaths. Examples include:

Children in this group are also likely to be disturbed by the above-mentioned violent and scary scenes.

None of concern in the film, although associated merchandise is marketed to children

Thor: The Dark World, sequel to the film Thor, is a fantasy action film targeted at adolescent males and other fans of Marvel comics. The Dark World is darker than the first Thor film but contains some clever humour. The M rating is well-deserved. The film contains sometimes brutal violence and scary scenes and characters which make it unsuitable for under 12s, and parental guidance is recommended for the 12-15 age group.

Parents may also wish to discuss with their children the importance of deciding what is important and of value in your life. Thor gave up a kingdom to follow his heart and maintain his relationship with Jane.