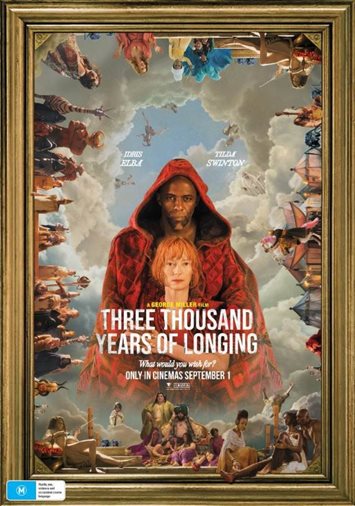 Not suitable under 15; parental guidance to 15 (adult themes, nudity and sex scenes)

Alithea (Tilda Swinton) is seemingly content with her life as a literary scholar, living in London, unattached and free to follow her intellectual pursuits. Her life is changed considerably, however, when she attends an academic conference in Istanbul. Back in her hotel room, a bottle Alithea bought at the Grand Bazaar appears to jump out of her hands and a mighty Djinn (Idris Elba) appears. The Djinn offers her three wishes in exchange for his freedom but Alithea needs time to decide what she really wishes for. During the time spent together, the Djinn tells Alithea the story of his life and the love affairs he has had, including with the Queen of Sheba.

Alithea discovers that she shares a love of stories with the Djinn and together they explore the deepest desires of human beings. The stories expand over three thousand years of his life, including a period in the Ottoman Empire. The Djinn describes the wars and intrigues of the Ottoman Emperors in order to hold on to power. During these conversations, Alithea realises that she has never felt the passionate love that the Djinn has felt on several occasions and this becomes her first wish.

Three Thousand Years of Longing is a fantasy drama based on the short story, The Djinn in the Nightingale’s Eye by A.S Byatt. The story in the film is told in narrative style, with the emphasis on the importance of storytelling. The scenery is quite spectacular; however, the sudden juxtaposition of scenes can be somewhat confusing, losing the depth and meaning of the film. Parents need to know that this is an adult fairy tale and not a modern version of Aladdin, despite the three wishes premise.

The main messages from this movie are that a good relationship should be about love and respect, without losing one’s identity and sense of self; and that if you set someone you love free, they will return to you if they truly love you.