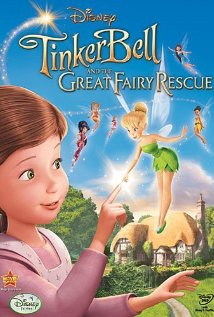 Suitable for all ages, PG for some children under 5 (Tense scenes)

Tinker Bell (voiced by Mae Whitman) and her friends have left Pixie Hollow to spend summer on the mainland. Unlike the other fairies Tinker Bell has not been to the mainland before and, despite warnings to stay well away from humans and their homes, her curiosity is piqued when she hears a car engine approach. Tinker Bell follows the car to find out how it works, but is trapped by a lonely little girl with a special love for fairies.

Lizzy (voiced by Lauren Mote) has come to the country for a summer holiday with her father Dr. Griffiths (voiced by Michael Sheen), who is very busy collecting scientific data to present to the London museum. He means well, but has very little time for his daughter and does not understand her fascination with fairies. Lizzy can hardly believe her eyes when she realizes that a little fairy has found her way into the house she made.

Tinker Bell is terrified at first, especially when she is pursued by Lizzy’s cat, but soon she and Lizzy become friends. While Tinker Bell teaches Lizzy about fairy life, Vidia (voiced by Pamela Adlon) and the rest of Tink’s friends launch a desperate plan to save her.

In the end it is Lizzy who helps to save the fairies and keep their secret safe.

Animals used for science, work-obsessed parents with little time for their children

There are no sexual references in this film

There are no sexual references in this film

There is no coarse language in this film.

Tinker Bell and the Great Fairy Rescue is an animated adventure generally suitable for the whole family. The plot is predictable, but young children will want to see it as will fans of Tinker Bell.

The main messages from this movie are that friendships can be formed in the most unlikely ways and that sometimes you just have to believe the unbelievable.