Tinkerbell and the Lost Treasure 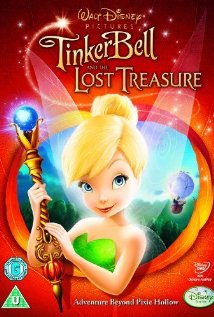 Tinkerbell and the Lost Treasure is an animated fairy story about the adventures of Tinkerbell who lives in pixie hollow. Tinkerbell (voice of Mai Whitman) is a tinker fairy and so makes, invents and fixes gadgets. As she can be impatient, some of these gadgets have a habit of going wrong and her impatience also means that she has a very quick temper.

One day she is given a very special task. She is expected to make a sceptre that will hold a moonstone at just the right angle so that when the next moon rises it will shine through the moonstone and produce special blue pixie dust that will keep the fairly tree alive for the next seven years. She feels very honoured as the other fairies know she is impatient and hence might not complete the task properly.

She only has a month to complete this and her friend Terence (Jesse McCartney) offers to help her. As time goes on she becomes very impatient with him as he is always cleaning up after her and giving her advice on how to make the sceptre just right. Inevitably they have a fight and the moonstone gets broken.

Tinkerbell then needs to journey to the island of the lost treasure where stolen treasure is buried and retrieve the magic mirror so that she can make a wish and get a new moonstone. Along the way she learns the value of patience and friendship.

Tinkerbell and the Lost Treasure is an animated adventure story for young viewers.

The main messages in the movie are: