Tinkerbell and the Pirate Fairy 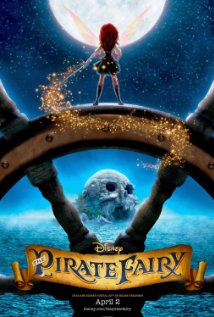 Tinkerbell and the Pirate Fairy is an animated film that follows the story of Zarina (voice of Christina Hendricks), an intelligent and inquisitive pixie dust-keeper fairy. Zarina had always been amazed by the magical qualities of pixie dust, and became determined to discover everything that it could do. However, after experimenting with blue pixie dust and causing an incident in Pixie Hollow, she is forced to leave her home to continue her experiments elsewhere.

A year later during the Four Seasons Festival, the pixies notice Zarina flying around the audience and creating poppies which put everyone to sleep. She heads to the dust depot and steals the blue pixie dust – without it, the fairies cannot multiply the yellow dust and continue to fly. After Zarina takes off, the other fairies set off in search of her.

The fairies discover that Zarina has taken control of a pirate ship, working as their captain and promising the crew that she will be able to make their ship fly using the fairy dust. However, things go wrong for Zarina, and James Hook (Tom Hiddleston) turns on her and takes back the ship. It is then up to Zarina’s friends to rescue her, and to get back the fairy dust that belongs to Pixie Hollow.

Younger children in this group may be worried by what happens to Zarina.

There is limited use of substances in this movie, including:

Tinkerbell and the Pirate Fairy is a film that talks about the choices and different paths individuals may take in life. It demonstrates that it can be dangerous to place one’s trust in strangers, and also highlights the importance of having trusted people in your life to guide you in making good choices. Additionally, the film depicts the strength of friendship as well as the necessity of forgiveness, and how both are needed in order for relationships to grow. The film is probably of most interest to children aged ten and under, but under sixes may need parent help with some scenes that they may find scary.

Parents may also wish to talk about the difficulties of always following rules and the importance of not always trusting strangers.