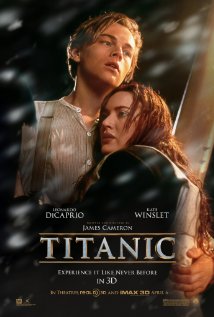 Not suitable under 10, not recommended under 13, PG to 15 (Length of film; Themes; Disturbing scenes)

Eighty four years after the sinking of the Titanic, Brock Lovett (Bill Paxton) and his crew are searching for lost treasure, in particular a famous diamond known as the Heart of the Ocean, which was lost when the Titanic went down. His search brings him into contact with Rose Dawson Calvert (Gloria Stewart), a survivor of the disaster and now 101 years old. The film tells the story of the tragic event from her perspective.

As a young girl, Rose (KateWinslett) is travelling on the Titanic to America to marry her fiancé CalHockley (Billy Zane). It is a loveless match made necessary by the death of her father, which left her and her mother penniless. Cal is a cruel and possessive man and Rose longs for her freedom. In desperation, she decides to jump off the ship but she is saved from doing so by the handsome young Jack Dawson (Leonardo DiCaprio). Jack is an artist and a drifter in life but had won tickets for his passage in steerage in a poker game.

During the two days they spend together, Rose and Jack fall deeply in love, despite their vastly different social backgrounds and fierce opposition from Rose’s mother and Cal. Cal does everything he can to prevent the two being together, including falsely accusing Jack of stealing the famous diamond. It is then that tragedy strikes when the ship hits the iceberg. What follows is a desperate attempt by passengers to save their lives, often at the expense of others, although some graciously give up their place on the lifeboats. As there are only half enough places in the lifeboats for the number of passengers, women and children from first class are saved first and tragically those in steerage are prevented from entering the lifeboats.

In addition to the above mentioned violent scenes, there are some scenes in this movie that could scare or disturb children aged under eight, including the following:

Titanic 3D is a classic dramatic movie about the terrible tragedy of the sinking of the Titanic. It is also a beautiful love story of two young star-crossed lovers which clearly shows the disparities between different social classes. It will appeal to older adolescents but is too intense for younger children and is made more so by the 3D effect. At 195 minutes, it is a very long film for children to sit through and parents may be also concerned by some of the coarse language.

The main message from this movie is that love overcomes social boundaries.