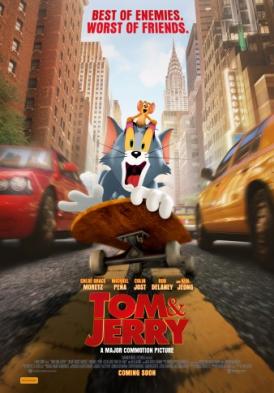 Not suitable under 5; parental guidance to 8 (violence, themes, scary scenes)

Unable to find a suitable place to live in the bustling city of New York, Jerry runs into his ‘pal’ Tom who dreams of making it big as a piano player. When old rivalries ignite and Jerry accidentally breaks Tom’s piano, a violent chase begins that only ends when Jerry, being small, is able to sneak into the fancy Royal Palace Hotel while Tom is left out on the street. As Jerry makes himself a luxurious little home, Tom lives in a cardboard box in an alleyway and tries to get into the hotel any way he can. Meanwhile, the down-and-out Kayla (Chloe Grace Moretz), who just lost her job due to an unfortunate run in with Tom, deceitfully manoeuvres her way into a new role at the Royal Palace Hotel. When a mouse problem threatens to ruin the extravagant wedding of socialites Preeta (Pallavi Sharda) and Ben (Colin Jost), Kayla promises her mistrusting manager (Michael Pena) that she will handle the situation and hires Tom to help her do so. When chaos naturally ensues, Kayla must convince Tom and Jerry to work together to help save her job, save a wedding and ultimately save each other.

Loneliness; Focussing all your energy on how things appear instead of how they really are; Using violence to solve conflict; Using others to get what you want.

Based on the iconic cat and mouse duo, Tom & Jerry is a live action movie featuring a variety of animated characters. The film is aimed at younger children who are likely to enjoy the farting humour, along with the crazy and violent relationship exhibited by the two rivals. However, it is important to note that some children may find it disturbing to see such intense animated violence depicted in real life situations. Therefore, this film is not suitable for children under 5 and parental guidance is recommended to 8.

The main messages from this movie are to do whatever you need in order to succeed; and that working together and cooperating can lead to wonderful results.