Tomorrow when the war began 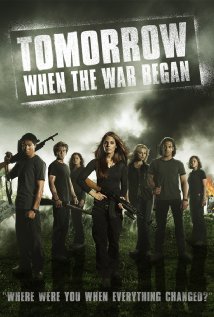 Not recommended under 15 (Violence, disturbing scenes, drug use, coarse language)

Based on the John Marsden classic and the first in a series of seven books, Tomorrow When the War Began is the story of seven teenagers who return from a camping trip to find Australia has been invaded by a foreign power.

With their friends and families captured, they decide to band together to fight the invaders. This causes them to question personal beliefs and pushes them to do things that they previously thought unimaginable. The movie delves into the teenagers’ loss of their fundamental freedom, the helplessness that ensues and their determination to fight for what is important to them.

There are many violent scenes in this movie including:

In addition to the above mentioned violent scenes, there are a number of scenes in this movie that could scare or disturb children aged under eight, including the following

In addition to the above mentioned violent and scary scenes and themes, children aged eight to thirteen may be particularly disturbed by the idea of invasion by a hostile force

Younger children in this age group may also find the content of the film disturbing.

Chris is identified as a ‘stoner’ and is seen to be smoking marijuana and possibly cigarettes. He also uses the terms “bent” and “baked”

Tomorrow When the War Began is a dramatic film that depicts the perils faced by a group of teenagers who return from a camping trip to find their homeland invaded by a foreign power and their loved ones captured and imprisoned.

Confronting scenes show the teens struggling to make choices between right and wrong behaviours (given the difficult situation they are in), pushing the limits of their personal beliefs and dealing with the reality of the consequences of their actions. Although some younger teens may have read the book on which the film is based, parents should be aware that this is definitely a movie for older adolescents and adults.