Too Old for Fairy Tales 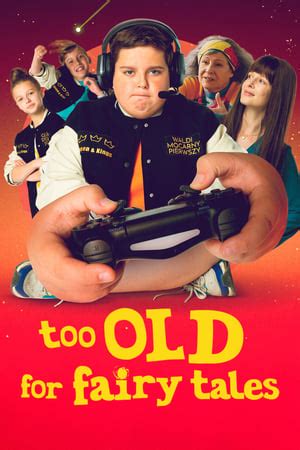 Not suitable under 8; parental guidance to 10 (mild violence, themes and language)

Spoiled and obese gamer, Waldek (Maciej Karas), wants nothing more than to be the best esports gamer in the world. He dreams of winning the coveted Robot Masters Gaming tournament with his best friend, Staszek (Patryk Siemek). His doting mother, Tereska (Karolina Gruszka), does everything she can to give Waldek an easy life: she picks out his clothes, feeds him whatever he wants and even walks him across the street. When she gets sick and has to go into hospital for extensive treatment, she asks her aunt, Mariola (Dorota Kolak), to come and stay with Waldek while she is away. Mariola has some different views about how children should be raised and straight away starts making healthy foods, forcing Waldek to exercise and do chores, and insists that he walk to school on his own. Waldek is very unhappy about this turn of events and just wants his mum to come home. When his team falls apart, Waldek and Staszek advertise for a new member but are reluctant to allow a girl to join them. Through a series of encounters with others, the boys will learn that when it comes to friendship, girls and the elderly, not everything is as it may appear.

Too Old for Fairy Tales is a Polish film (dubbed in English) based on the book by Agnieszka Dabrowska. Though the dubbing sometimes seems a little off, the film features a charming cast and casts a light on some big issues such as entitlement and how scary the concept of loss can be. Due to violence, themes and language, this film is not suitable for children under 8 and parental guidance is recommended to 10.

The main messages from this movie are that kids are often more capable than they are given credit for; that the best way to handle fear is to share it with others as this will lighten your load; and that you must always do something instead of doing nothing.