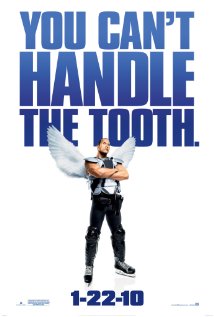 ??????Derek Thompson (Dwayne Johnson) earned his name on the ice hockey field as ‘the Tooth Fairy’ due to his aggressive behaviour and ability to knock out his opponents’ teeth. After sustaining a serious shoulder injury, he was moved down to a minor grade and now has a tough and cynical approach to life. His attitude results in him dashing children’s hopes and aspirations, and affects his relationship with his girlfriend (Ashley Judd) and her children.

Derek’s behaviour comes to the attention of the Head Fairy (Julie Andrews) who sentences Derek to a week working as a real Tooth Fairy, complete with wings. He is assigned to a carer named Tracy (Stephen Merchant) who is given the task of rehabilitating Derek from a hard-nosed cynic to a more caring and kind-hearted person.

There is some violence in this movie, including sporting action, and frequent accidental harm mainly played for laughs. Examples include:

•    Accidental, and deliberate, pushing and shoving on the ice rink
•    A player is pushed through a glass barrier, shattering glass everywhere and losing his tooth.
•    Derek reacts badly when he finds himself in fairyland and pushes fairies out of his way.
•    Derek and Tracy constantly bicker, push each other and fight with fairy wands.
•    During a flying lesson, Derek gets assaulted with tennis balls, including to his genitals.
•    Derek gets squashed behind a door
•    Derek suffers a lot of accidental damage as a tooth fairy, including falling off beds and over balconies.

?Most children in this age group are unlikely to be disturbed by anything in this film

??The following products are displayed or used in this movie:

Tooth Fairy is a family comedy that could appeal to all ages. Julie Andrews is a wonderful Head Fairy while Dwayne Johnson is hilarious in a tutu.

This movie could also give parents the opportunity to discuss with their children the problems faced by children in single parent families and the importance of not taking out frustrations and personal disappointments on other people.