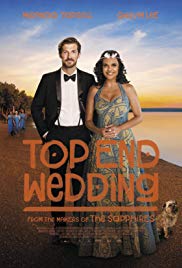 Not recommended under 15 due to sexual references, coarse language and substance use.

After getting a promotion at work, Lauren’s (Miranda Tapsell) workaholic boss Hampton (Kerry Fox) gives her ten days to organize and celebrate her wedding to fiancé Ned (Gwilym Lee). The couple head to Darwin to surprise Lauren’s family but the surprise is on them as Lauren arrives home to learn that her mother Daffy (Ursula Yovich) has just left her father Trevor (Huw Higginson). Unable to get married without her, Lauren and Ned set off through the Northern Territory to try and find Daffy and bring her home. Meanwhile Lauren enlists Hampton’s help to organise her father and friends, who are making a complete shamble of the wedding preparations. While her boss negotiates cakes and flowers, Lauren and Ned negotiate the ups and downs of their unique relationship and, in the end, they do not get the wedding that they planned - they get something infinitely better.

Top End Wedding is a romantic comedy about families, intercultural marriages and the challenges of relationships. The acting is excellent, the cinematography is beautiful and the cultural elements are shown in a respectful and endearing manner. This is not a family film however and will best be enjoyed by older audiences.

The main messages from this movie are that life is an adventure, that it is never too late to right a wrong and that if you follow your heart long enough it will lead you home.

This movie could also give parents the opportunity to discuss with their children the importance of responding to phone calls when your parents ring and keeping communication lines open, especially when the topics are difficult to discuss.