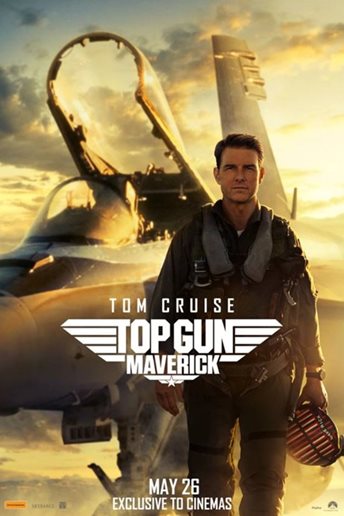 Not suitable under 12; parental guidance to 14 (violence, coarse language)

It has been thirty years since Captain Pete Mitchell (Tom Cruise) ‘Maverick’ became a hero and he has gone on to serve in the US navy as one of its top pilots. Maverick is recalled to teach the young aviators his skills, in particular to destroy an underground nuclear site which has become a present threat.

Amongst the new set of pilots is Lt Bradley ‘Rooster’, the son of Maverick’s old friend, Goose. Maverick is reluctant to put Bradley’s life in danger, but he has other ideas. Maverick also meets up with an old girlfriend, Penny (Jennifer Connelly), who now has a young daughter.

The mission to destroy the nuclear site is an extremely dangerous one, in which the likelihood of success is very low. It involves flying at speeds reaching Mach 10 (10 times the speed of sound). Having completed the task, getting away without being shot down by enemy fire is also highly probable. Nevertheless, Maverick leads his heroic team out at great risk to all of them, with Rooster as his wingman.

Top Gun: Maverick is a fast moving, adrenaline-filled action movie. The story is somewhat hackneyed and the romance is tokenistic. However, the filming of the modern fighter aircraft in combat is quite spectacular and will keep you on the edge of your seat. Due to the intensity of the movie, the violent content and the coarse language, it isn’t suitable for children under 12 and parental guidance is recommended to 14.

The main messages from this movie are that all things are possible with the right training, knowledge and discipline and to learn from previous mistakes.