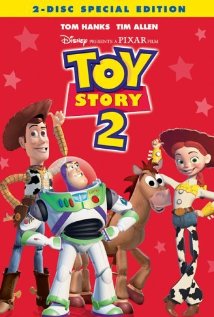 Parental guidance under 5, and for some 5-8s (Violence, scary scenes)

When Andy’s (John Morris) family decides to have a garage sale one of the toys from Andy’s room gets put into the sale box. While the rest of the toys keep watch at the window Woody (Tom Hanks) launches a rescue mission to save it. With the help of the family’s dog Woody saves the toy, but loses his grip and falls to the ground. Al, (Wayne Knight) a greedy collector and the proprietor of Al’s Toy Barn, finds him and can hardly wait to buy him, as he has spent years searching for this exact replica of Woody. Andy’s mom (Laurie Metcalf) tells him repeatedly that Woody is not for sale and locks him in the money box for safe keeping. Undaunted, Al takes the money box, breaks the lock open and steals Woody.

Andy’s toys, lead by Buzz Lightyear (Tim Allen), launch their own rescue mission to save Woody and bring him home. This is easier said than done, especially when they find they have to repeatedly outwit the Evil Emperor Zurg (Andrew Stanton) who is pursuing Buzz.

Meanwhile Woody learns of his origins, that he is part of a collectors set and that he is the star of his own TV show. As he gets to know his co-stars Jessie (Joan Cusack) and Stinky Pete (Kelsey Grammer) and their history Woody is drawn towards them and away from his old life in Andy’s room. When his rescuers finally show up he must decide between being adored from afar forever, or loved by a child for a short time.

Commercialism, kidnapping, growing out of childhood

In addition to the above-mentioned violent scenes, there are some scenes in this movie that could scare or disturb children under the age of five, including

Toy Story 2 3D is an animated adventure, featuring more realistic special effects than its original version thanks to the 3D technology. Fans of the original films are likely to enjoy seeing this.

This movie could also give parents the opportunity to discuss with their children the importance of helping those in need and being prepared to understand the feelings and actions of others.