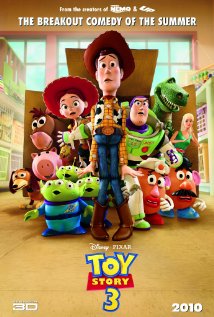 Not recommended under 5, PG to 8 (Violence, scary scenes)

Andy Davis (John Morris) is now 17 years old and about to head off to college. When his mother asks him to sort through his stuff, Andy decides to take Woody along to college and puts the remaining toys in a black garbage bag to store in the attic. However, his mother mistakes the bag for rubbish and puts it out for collection.

Thinking that Andy does not want them any more, the toys jump into a box headed for ‘Sunnyside’ child care care centre and Woody unintentionally joins them. The toys are joyfully met by other toys at the centre, led by a strawberry scented teddy bear called Lotso (Ned Beatty). Woody leaves the others to get back to Andy, feeling happy that they have found somewhere where they will be played with and enjoyed by lots of children.

However, the toys get an unpleasant surprise when they are placed in the toddler room at the daycare centre and experience the rough play that toddlers engage in. They decide to escape and head back to Andy’s attic but Buzz is caught by the now not so friendly Lotso and reprogrammed back into his galactic superhero state. Buzz turns on the others and imprisons them so they cannot escape and it is now up to Woody to rescue them.

In addition to the above-mentioned violent scenes, there are some scenes in this movie that could scare or disturb children under the age of five. They are enhanced by the 3D component of the film which causes objects to suddenly emerge from the screen. Examples include:

Children in this age group may also be disturbed by some of the above mentioned scenes and by the plight of the toys as they feel abandoned by Andy, are mistreated and trapped at the child care centre and in peril at the rubbish dump.

There is also a significant amount of merchandise, including toys and clothing, being marketed to children in association with the film.

There is no use of substances in this movie, but in one scene some characters are betting on a roulette-type game using batteries and toy coins as money. There are drinks around the table, although they are not obviously alcoholic.

There is some name-calling, including:

Toy Story 3 3D is a quality animated adventure movie that is likely to be enjoyed by most of the family, although it is darker and more scary than previous Toy Story movies and not recommended for under fives..