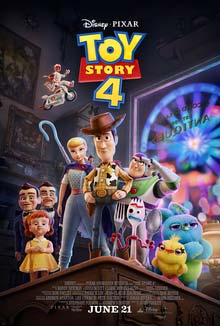 Not suitable under 5, parental guidance under 7 (animated violence and some scary scenes)

After their former owner goes off to college, Woody (voiced by Tom Hanks) and the gang find themselves with a new kid called Bonnie (voiced by Madeleine McGraw) who loves them dearly. Bonnie has a shaky start to her first day of school, but Woody is there to help her and he sees firsthand how much her craft creation called Forky (voiced by Tony Hale) means to her. When the family heads off on a road trip, Woody dedicates himself to safeguarding Forky who still believes he is a piece of trash and keeps trying to throw himself away. When Forky falls out the window, Woody goes after him. On their way back to the camp site, Woody and Forky find their way into an antique shop where they are pursued by an antique doll Gabby Gabby (voiced by Christina Hendricks) and her numerous vintage ventriloquist henchmen. Woody is given to a little girl while Forky is taken hostage. When Woody fails to return at the appointed hour, Buzz (voiced by Tim Allen) sets off to find him while Jessie (voiced by Joan Cusack) and the others hang back with Bonnie who is devastated at Forky’s disappearance. Meanwhile Woody encounters his long lost friend Bo Peep (voiced by Annie Potts) who, with the help of Buzz and some new friends, agrees to help them rescue Forky from Gabby Gabby. When their plan backfires the characters are all forced to face what is most important, whether it be family, friendship, adventure or belonging and they soon come to realize that they can each make a difference no matter what path they choose.

Abandonment, finding your identity, separation between friends, hurtful rejections and the somewhat dangerous notion that if you fix what is wrong with you will find love or acceptance.

Toy Story 4 is an animated adventure, rumoured to be the final instalment in the widely popular Toy Story series. As a family movie, it will likely appeal to younger audiences and fans of the earlier films.

The main messages from this movie are to listen to your inner voice, to be there to care and comfort others and to find your purpose in life, whatever that may be.