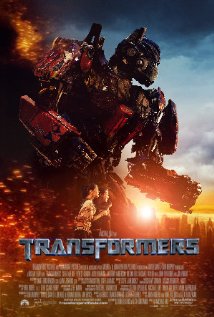 Not recommended under 12, PG to 15 (Violence, Scary scenes)

Transformers tells of the longstanding intergalactic battle between the ‘good’ Autobots led by Optimus Prime (voiced by Peter Cullen) and the ‘bad’ Decepticons, led by the evil Megatron (voiced by Hugo Weaving). Their battle centres on each side trying to find and obtain the source of all Transformer power, the Cube. The Cube has been hidden on planet Earth for many years, where Megatron and his forces have begun infiltrating military and political bases to find it. An artic explorer of the early 1900s, Captain Witwicky stumbled upon this plot and left the secrets of his discovery to his family.
Over 100 years later, his great grandson, Sam Witwicky (Shia LeBeouf) uses a school presentation both to impress a popular classmate, Mikayla (Megan Fox), and to sell off some his intrepid ancestor’s belongings to fund the purchase of his first car. The car ultimately selected is an old yellow Camaro, which Sam discovers is in fact the Transformer Bumblebee. He also discovers that he holds important secrets to the location of the Cube and that Bumblebee is his guardian.
Meanwhile, in warzone Qatar, a US military base is attacked by an unknown but deadly foe. The only survivors are a squadron and their captain (Josh Duhamel) and they try desperately try to warn the Secretary for Defence (Jon Voigt) of this new threat. He in turn enlists young computer analysts to identify where the enemy is from. A young female analyst (Rachel Taylor) identifies the force to be the robotic and alien Decepticons.
Back in LA, as Sam finds himself being pursued by both the Decepticons and an operative (John Turtuorro) from the secretive Section Seven, Mikayla finds herself caught up in his troubles. As the Decepticon threat looms, Bumblebee sends a message to his Autobot friends, who crash down to earth. The Autobots, along with their human friends, join together in a final bid to rid earth and the galaxy of the destructive Decepticons.

Children in this age group may also be disturbed by many of the above-mentioned scenes.

Children in this age group may also be disturbed by many of the above-mentioned scenes.

Depending on sensitivity, some children in this age group may also be disturbed by some of the above mentioned scenes

The Transformers is an action adventure movie adaptation of the 1980’s cartoon series featuring the Autobots and Decepticons. This well-made and surprisingly humorous movie will be enjoyed particularly by a male audience, both adolescents and adults.
The main messages from this movie are that sometimes victory can only be achieved by true sacrifice and that people/robots can have hidden depths and qualities.