Transformers: Dark of the moon 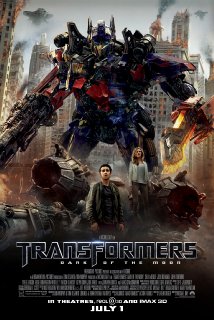 Not suitable under 12; Not recommended 12-15 (Violence; Disturbing scenes; Coarse language)

The opening scenes of Transformers: Dark of the Moon depict the final stages of a war between the Autobots and the Decepticons with their home planet of Cybertron being all but destroyed. In the final moments of the battle we see an Autobot spacecraft attempting to escape, and learn that the ship referred to as the “Ark” was carrying a cargo that could win the war for the Autobots. However the ship is hit by enemy missiles and appears to be destroyed before it can escape.

In the present day we find Sam Witwicky (Shia LaBeouf), who has just graduated from college living with his new girlfriend Carly Spencer (Rosie Huntington Whiteley) in Washington D.C., while the Optimus Prime, leader of the Autobots, and the other Autobots are working with the US government to keep the planet free of Decepticons.

While on a mission to investigate the happenings at Chernobyl’s deserted nuclear plant, Optimus Prime discovers a fuel cell from the lost Ark. Optimus Prime demands answers from the head of National Security (Frances McDormand), who informs him about a crashed spaceship on the dark side of the moon. Optimus and a team of Autobots go to the moon where they discover that the crashed ship is the lost Ark.

Meanwhile, Sam has landed himself a new job, while Sam’s girlfriend Carly is working for a wealthy accountant named Dylan Gould (Patrick Dempsey), who we later learn is working for the Decepticons. As soon as Sam starts his new job he finds himself involved in “dark side of the moon” conspiracies, and is attacked by Decepticons. Sam manages to escape to an army base and is reunited with his Autobot friend Bumble Bee. He also enlists the aid of an old friend, Seymour Simmons (John Turturro) in the latest fight to save the world from the Decepticons

Transformers: Dark of the Moon features prolonged sequences of intense science fiction action violence and destruction. While most of the violence is enacted between giant metal live robots, the violence is brutal, with copious amounts of blood and gore depicted. Examples include:

Parents of younger children are strongly cautioned that, in addition to the violence described above, Transformers: Dark of the Moon contains frequent images and scenes capable of disturbing young children. Examples include:

Children in this age group are also likley to be disturbed by the above-mentioned scenes.

The film contains coarse language, name calling and putdowns, including:

Transformers: Dark of the Moon is the third in the Transformers series It is a science fiction action adventure, targeting an adolescent male audience. Parents should note that this film seems to have been raised a notch or two from its predecessors in terms of the amount of violence, the level of brutality and the amount of blood and gore. At 149 minutes, it is also very long. Although Transformers toys are specifically marketed for very young children, this film is not at all suitable for children and contains scenes and characters capable of scaring and disturbing young children.

The main positive messages from this movie are:

Values in this movie that parents may wish to reinforce with older children include selflessness, courage and bravery.However, parents may wish to discuss the portrayal of female characters in this film, including amount of time given to them and the stereotypical manner in which they are depicted.