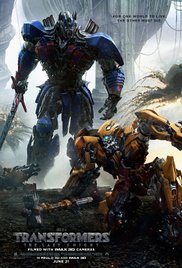 Not recommended under 13, parental guidance strongly recommended 13 to 15, due to violence, scary scenes and characters and coarse language

The film’s opening scene is set in England during the Dark Ages. An army lead by King Arthur (Liam Carrigan) is engaged in battle against an invading force. Merlin (Stanley Tucci) arrives wielding a magic staff that allows him to control a gigantic three-headed dragon transformer called Dragonstorm which drives off the invading army. We learn that the staff can only be wielded by Merlin or one of his direct descendants.

The film skips to the present day where we find Optimus Prime (voice of Peter Cullen) on a quest to find his creator. The Transformer Autobots, now declared illegal, have gone into hiding after being hunted by the TRF (Transformer Reaction Force) who destroy any Autobots they come across. A young girl Izabella (Isabella Moner) attempts to save a dying ancient Transformer Knight but is attacked by the TRF and only just saved by a hero from previous Transformer films, Cade Yeager (Mark Wahlberg). The Knight dies but bestows upon Cade an ancient talisman which gives him special powers.

Cade is approached by a humanoid Autobot named Gogman (Jim Carter) who convinces him to journey to England where he meets Sir Edmund Burton (Anthony Hopkins) a member of the order of Witwiccans, who have been keeping the Transformers’ existence a secret since the days of King Arthur. Arthurian historian Viviane Wembley (Laura Haddock) also goes to meet Sir Edmund. Sir Edmund reveals the secret of the staff of Merlin and its role in protecting the Earth and tells how Viviane, as Merlin’s surviving descendant, is the only person alive capable of wielding Merlin’s staff.

The remainder of the film is a battle between two ancient enemies, with the fate of the world resting on the shoulders of a small number of humans and Autobots.

In addition to the above-mentioned violent scenes and scary visual images, there are many scenes in this movie that could scare or disturb children under 8, including the following:

Besides an entire toy franchise based around the film’s characters the film depicts a number of brand names vehicles including General motors, Lamborghini, Chevrolet, Dodge, Range Rover, Lexus and Mercedes. There are also Adidas and Nike clothing and footwear.

The film contains sexual references and innuendo throughout. Examples include:

Transformers: The last knight is the latest film in this science-fiction  adventure series targeting adolescent fans. It may appeal to younger children, particularly those who have Transformer toys, but the M rating is appropriate - violence, scary scenes and characters, and coarse language make it unsuitable for viewers under 13 and parental guidance is recommended for the 13 to 15 age group, as some children in this group may find some scenes disturbing.