Trollhunters: Rise of the Titans 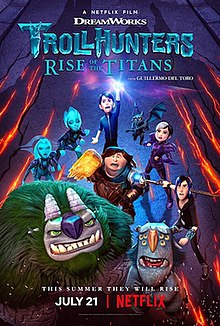 Not suitable under 8; parental guidance to 10 (fantasy action violence, themes of death and loss)

Trollhunters: Rise of the Titans is the finale to popular CGI animated fantasy-adventure series, Trollhunters, 3Below, and Wizards. When we last met Jim Lake (voiced by Emile Hirsch), the magic amulet that gave him his Trollhunting powers had been destroyed by the Arcane Order. Feeling vulnerable and unsure of himself, Jim must reunite with the old team to battle two primordial beings - Bellroc (voiced by Kay Bess and Piotr Michael) and Skrael (voiced by Piotr Michael) - hell bent on kidnapping their fellow primordial being, Nari (voiced by Angel Lin), to bring about the end of life on earth and ‘reset’ the planet using three giant elemental titans (Nature, Ice, and Fire). To save the world, Jim must find his courage and work out how to defeat the titans with the help of his love-interest, Claire Nunez (voiced by Lexi Medrano), his best friend, Toby Domzalski (voiced by Charlie Saxton), Master Wizard Douxie (voiced by Colin O’Donoghue), Troll friends Blinky (voiced by Kelsey Grammer) and AAARRRGGH!!! (voiced by Fred Tatasciore), and his alien friends Krel (voiced by Diego Luna), Aja (voiced by Tatiana Maslany), and Varvatos Vex (voiced by Nick Offerman).

Death; Natural disasters; Children as victims (this is within a context in which the children have means to fight back).

Trollhunters: Rise of the Titans is the final instalment in the animated Tales of Arcadia franchise, created by Guillermo Del Toro. This film is fast paced, action-packed, and the most violent of the franchise, depicting frequent injury and death throughout, however, it is likely to entertain older children, over the age of 8, particularly those who have seen the previous films and television episodes. Due to animated violence, frequent frightening sequences, and depictions of death, this film is not suitable for children under the age of 8 and parental guidance is recommended to 10.

The main message from this movie is that courage and strength come from within, not from the armour we wear.